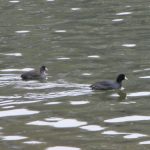 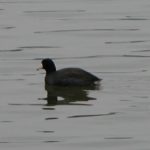 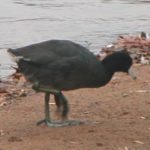 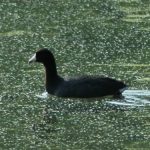 The American Coot (Fulica americana) is a large waterbird, of the family Rallidae. Adults have a short thick white bill and white frontal shield, with a reddish-brown spot near the base of the bill between the eyes. The body is grey with the head and neck darker than the rest of the body. Their legs are yellowish, with scalloped toes rather than webbed feet. Their chicks have black bodies with bright red head and beak and orange plumes around the neck.
Their breeding habitat is marshes from southern Quebec to the Pacific coast of North America and as far south as northern South America. They nest in a well-concealed location in tall reeds. They are frequently seen swimming in open water.
They migrate from northern locations to the southern United States and southern British Columbia. They are often year-round residents where water remains open in winter.
These birds can dive for food but can also forage on land. They are omnivores, eating plant material, insects, fish, and other aquatic animals. Adults mostly consume “pond scum”.
Their call is a high-pitched squeaking honk somewhat like a goose’s but more hollow sounding.
American coots are highly territorial during the breeding season, with both males and females fighting with neighbors to maintain a small territory where they obtain all their food. The females are known to lay eggs in neighbors’ nests (known as conspecific brood parasitism).
These chunky birds require a great deal of effort to become airborne, pedaling across the water with their feet before lifting off. The way in which their heads bob when they walk or swim has earned them the name “mud hen”.
Although coots look like weak fliers, this species has crossed the Atlantic to reach western Europe at least 23 times, including 12 records in the Azores and four in Great Britain. In December 2003, an individual of this species attempted to overwinter in the Shetland Islands, Scotland.

The text within the green border is licensed under the GNU Free Documentation License. To see the full article with more information, visit the Wikipedia article “American Coot “. All content outside the green border is copyrighted by McBryde Website Design.

For more information from the USGS (United States Geological Survey)
on the American Coot, click here.