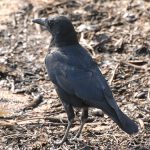 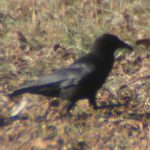 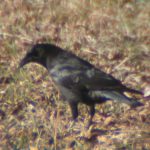 The American Crow (Corvus brachyrhynchos) is slightly smaller than the European Carrion Crow in overall size (39-49 cm in length) and also has a proportionately smaller bill. Feathers are black, with a purple or blue iridescence in some lights. Legs, feet, and bill are also black. Several regional forms are recognized and differ in bill proportion and overall size from each other across North America, generally smallest in the southeast and the far west. The Northwestern Crow Corvus caurinus is very closely related to the American Crow and indeed structurally, they almost blend into each other in northern Oregon through the voice remains one of the principal differences between these two close species.

Range: Occurring from British Columbia to Newfoundland in the north, and the Gulf of Mexico to Florida in the southern parts of its range and includes virtually all types of country from wilderness, farmland, parks, open woodland to towns and major cities. This bird is generally a permanent resident, but many birds in the northern parts of their range migrate short distances south. Outside of the nesting season, these birds often gather in large communal roosts at night.

Diet: A typical crow taking invertebrates of all types, carrion, scraps of human food, seeds, eggs and nestlings, stranded fish on the shore and various grains. It also, like most crows, scavenges at rubbish dumps. Where available, corn is a favorite food. They are also fond of discarded scraps of fast food, especially french fries which can be carried away easily in their strong beaks.

Nest: These birds build bulky stick nests, nearly always in trees but sometimes also in large bushes and, very rarely, on the ground. They will nest in a wide variety of trees, including large conifers, although oaks are most often used. Three to six eggs are laid and incubated for 18 days. The young are fledged usually by about 35 days. Normally single nesting, the species has been recorded as nesting in small colonies in the western parts of its range.

Voice: The most usual call is a loud, short, and rapid “caah-caah-caah”. Usually, the birds thrust their heads up and down as they utter this call. Crows can also produce a wide variety of sounds and sometimes mimic noises made by other birds and animals.

The text within the green border is licensed under the GNU Free Documentation License. To see the full article with more information, visit the Wikipedia article “American Crow“. All content outside the green border is copyrighted by McBryde Website Design.

For more information from the USGS (United States Geological Survey)
on the American Crow, click here.