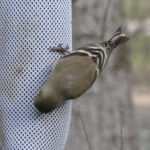 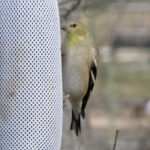 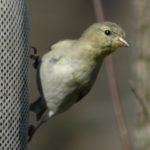 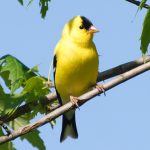 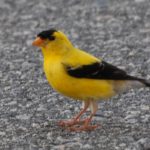 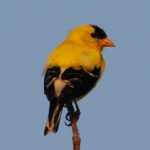 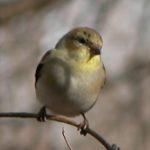 The Eastern or American Goldfinch (Carduelis tristis) is a typical North American seed-eating member of the finch (Fringillidae) family, averaging 11 cm in length. It breeds across southern Canada from British Columbia to Newfoundland and through most of the United States north of the Gulf and core Southwestern States.

It prefers trees in open places, especially in orchards and along roadsides. As winter approaches, the goldfinch moves short distances towards the south. Its winter range includes southern British Columbia, Manitoba, Ontario, New Brunswick, Nova Scotia, and most of the United States.

In spring the birds moult all but their black wing and tail feathers, and the bills of both sexes turn orange. The male assumes brilliant canary yellow plumage and a striking jet black cap; he has a very pleasing call song. In flight, a white rump contrasts with the black tail. The common winter plumage is a duller olive-brown with some yellow still showing on the head. In some winter ranges the birds lose all traces of yellow, becoming predominantly medium tan-grey banded color, with an olive cast evident only on close viewing.

Their flight path is not straight horizontally; instead, they generally fly while going slightly up and down, making an ocean wave-shaped path. The American Goldfinch lays four to six bluish-white eggs, roughly the size of peanuts.

Their favorite foods (at least in the U.S.) are thistle and teasel seeds. However, they also eat small seeds from other weeds, grasses and trees, tree buds, maple sap and sometimes insects. In winter, they are often seen in flocks.

This is the state bird of Iowa, New Jersey, and Washington. This bird is also known as the Wild Canary.

The text within the green border is licensed under the GNU Free Documentation License. To see the full article with more information, visit the Wikipedia article “American Goldfinch“. All content outside the green border is copyrighted by McBryde Website Design.

For more information from the USGS (United States Geological Survey)
on the American Goldfinch, click here.