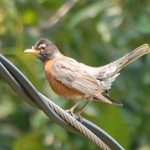 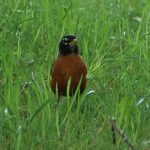 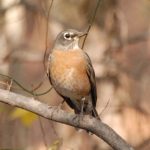 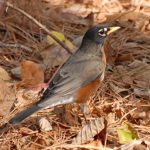 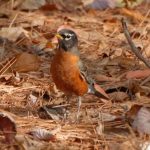 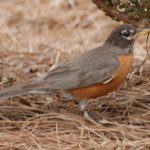 The American Robin (Turdus migratorius) is a migratory songbird of the thrush family. The similarity between the orange-red coloring of its breast to that of the smaller and unrelated European Robin (Erithacus rubecula) led to its common name. The American Robin is the state bird of Connecticut, Michigan, and Wisconsin.

The American Robin is 23–28 cm (10–11 in) long, averaging about 77 g (2.7 oz), with a wingspan ranging from 119 to 137 millimeters. In the wild, the longest known lifespan of an American Robin is 14 years, but the average lifespan is about 2 years. It has a brown back with a reddish-orange breast. It is white underneath the tail feathers and on the lower belly. The throat is white with black streaks, and males are generally brighter than females. It has a small yellow beak and distinctive crescents around the eyes. There are seven sub-species, but only T. m. confinus in the southwest is particularly distinctive, with pale gray-brown underparts. Juveniles are paler in color than adult males and have dark spots on their breasts.

This bird breeds throughout most of North America, from Alaska and Canada southward to northern Florida and Mexico. While Robins occasionally overwinter in the northern part of the United States and southern Canada, most winter south of Canada from Florida and the Gulf Coast to central Mexico, as well as along the Pacific Coast. Most depart south by the end of August and begin to return north in February and March (exact dates vary with latitude and climate). This species is a very rare vagrant to western Europe.

However, in autumn 2003, migration was displaced eastwards leading to massive movements through the eastern USA. Presumably, this is what led to no fewer than three American Robins being found in Great Britain, with two attempting to overwinter in 2003–2004, one of which was taken by a Eurasian Sparrowhawk, and one sighted in Britain in January 2007 in Gilstead, West Yorkshire, England.

The American Robin’s habitat is woodland and more open farmland and urban areas.

The American Robin is active mostly during the day, assembling in large flocks at night, roosting in trees in secluded swamps or dense vegetation. In the winter, they gather in large numbers on their winter grounds, breaking up during the day to feed on fruits and berries in smaller flocks. During the summer, American Robins defend breeding territories and are less social during that time.

Robins are frequently seen running across lawns, picking up earthworms by sight. In fact, running and stopping the behavior is a distinguishing characteristic. When stopping, they are actually looking for prey, not listening.

A robin with wormsAmerican Robin diet generally consists of around 40 percent invertebrates, such as beetle grubs, caterpillars, and grasshoppers, and 60 percent fruits and berries.[3] It feeds on a mixture of both wild and cultivated fruits and berries. It forages primarily on the ground for soft-bodied invertebrates, and finds worms by sight, pouncing on them and then pulling them up.

Juvenile robins and eggs are preyed upon by squirrels, snakes, and some birds, such as Blue Jays, Common Grackles, American Crows, and Common Ravens. Adults are primarily taken by hawks, cats, and larger snakes, although when feeding in flocks, the American Robin is able to remain vigilant and watch other flock members for reactions to predators.

The American Robin begins to breed shortly after returning to its summer range from their winter range. It is one of the first bird species to lay eggs, and normally has two to three broods per breeding season. The breeding season lasts from April to July.

Nests are most commonly located five to fifteen feet above the ground in a dense bush or in a fork between two tree branches and are built by the female. The outer foundation consists of long coarse grass, twigs, paper, and feathers, lined with smeared mud and cushioned with fine grass or other soft materials. New nests are built for each brood, and in northern areas, the first clutch is usually placed in an evergreen tree or shrub while later broods are placed in deciduous trees.

A clutch consists of three to five light blue eggs and is incubated by the female. Eggs hatch after 14 days and chicks leave the nest two weeks later. All chicks in a brood leave the nest within two days of each other. While the chicks are still young, the mother broods them continuously but will brood them only at night or during bad weather when they are older. Even after leaving the nest, the juveniles will follow their parents around and beg food from them. Juveniles become capable of sustained flight two weeks after fledging.

The eyes of the pink featherless nestlings are closed for the first five days. Both parents feed the nestlings a diet of earthworms, insects, and berries.

The adult male and female both are active in protecting and feeding the fledged chicks until they learn to forage on their own. The adult Robins give alarm calls and dive-bomb predators, including domestic cats, dogs, and humans, that come near the young birds. The fledglings are able to fly short distances after leaving the nest. The wings of juvenile birds develop rapidly and it only takes a couple of weeks for them to become proficient at flying. The cryptic young birds perch in bushes or trees for protection from predators. Bird banders have found that only 25% of young robins survive the first year. The American Robins are not shy about nesting close to human habitation.

The male American Robin, as with many thrushes, has a beautiful, complex and almost continuous song. Its song is commonly described as a cheerily carol, made up of discrete units, often repeated, and spliced together into a string with brief pauses in between. The song varies regionally, and its style varies by time of day. American Robins will often be among the first songbirds singing as dawn rises, and last as evening sets in.

The text within the green border is licensed under the GNU Free Documentation License. To see the full article with more information, visit the Wikipedia article “American Robin“. All content outside the green border is copyrighted by McBryde Website Design.

For more information from the USGS (United States Geological Survey)
on the American Robin, click here.