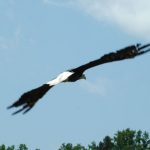 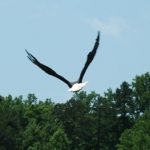 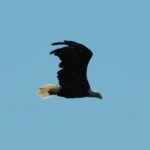 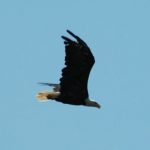 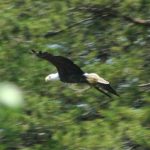 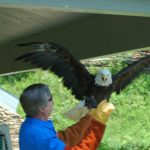 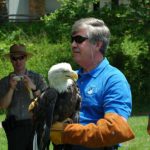 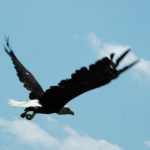 Bald Eagles are not common around Lake Norman but nesting pairs have been seen. The photos above were taken at Lake Norman State Park when the Carolina Raptor Center released an Eagle that was rehabilitated after injuries.

The Bald Eagle (Haliaeetus leucocephalus) is a bird of prey originating in North America, most recognizable as the national bird of the United States. The species was on the brink of extinction late in the 20th century but now has a stable population and is in the process of being removed from the U.S. federal government’s list of endangered species.

The bird gets both its common and scientific names from the distinctive appearance of the adult’s head. Bald in the English name refers to the white head feathers, and the scientific name is derived from Haliaeetus, the New Latin for “sea eagle,” (from the Greek haliaetos) and leucocephalus, the Greek for “white head,” from leukos (“white”) and kephale (“head”).

Range and habitat
Bald Eagles can be found in small concentrations throughout the U.S. and Canada, particularly near large bodies of water. The state with the largest resident population is Alaska; out of the estimated 100,000 Bald Eagles on Earth, half live in Alaska.

Bald Eagles are protected by two federal laws in the United States: the Eagle Law, which protects Bald and Golden Eagles, and the Migratory Bird Act.

Behavior
Bald Eagles build huge nest platforms out of branches, usually in large trees. Pairs, who mate for life, add material to the nest each breeding season. After several years, the nest may weigh upwards of a thousand pounds or more.

Bald Eagles which are old enough to nest often return to the area in which they were raised. They are more social than many other raptor species: an adult bald eagle looking for a nesting site is more likely to select a location that contains other immature eagles than one with no eagle population. Bald Eagles are powerful fliers and ride thermal convection currents to range far.

They have a long lifespan, with reports of birds in captivity living to be 60 years old.

They do not scream as often shown on television. Usually, the call of a red-tailed hawk is placed over the image of a flying eagle. They squeak and have a shrill cry, punctuated by grunts.

Reproduction
Bald Eagles are sexually mature at 4 or 5 years of age. Mated pairs produce between one and three eggs per year, but it is rare for all three chicks to successfully fledge. Third chicks are sometimes removed from nests to use in reintroduction programs in areas where the species has died out.

In such programs, the birds are raised in boxes, on platforms in the tree canopy, and fed in such a way that they cannot see the person supplying their food until they are old enough to fly and find their own food.

Diet
The Bald Eagle’s diet is varied, including carrion, fish, smaller birds, rodents, and sometimes food scavenged or stolen from campsites and picnics. To hunt, the eagle swoops down over the water and snatches the fish out of the water with its talons. They eat by holding the fish in one claw and tearing the flesh with the other. Eagles have structures on their toes called spiricules that allow them to grasp fish. Osprey also has this adaptation.

Sometimes, if the fish is too heavy, the eagle will be dragged into the water. It may swim to safety, but some eagles drown or succumb to hypothermia.

Eagles and humans
As the symbol of the United States, the bald eagle is sought after in captivity. As a rule, they are poor birds for public shows being timid and prone to becoming highly stressed.

Due to their immense strength and unpredictable nature, bald eagles should only be kept by very competently trained individuals who have all the proper permits.

Rare vagrant
This species has occurred as a vagrant once in Ireland. The exhausted specimen was discovered by a national parks worker in a northern heath. Presumably, a storm blew it out to sea, and the bird struggled across the Atlantic Ocean.

National Bird of the US
The Bald Eagle is the national bird of the United States of America. Its national significance dates back to June 20, 1782, when the Continental Congress officially adopted the current design for the Great Seal of the United States including a bald eagle grasping arrows and an olive branch with its talons. Some states had earlier adopted the bird as a symbol; for example, New York State did so in 1778.

In 1784, after the end of the Revolutionary War, Benjamin Franklin wrote a famous letter to his daughter from Paris criticizing the choice and suggesting Wild Turkey as an alternative:

For my own part, I wish the Bald Eagle had not been chosen the Representative of our Country. He is a Bird of bad moral character. He does not get his Living honestly. You may have seen him perched on some dead Tree near the River, where, too lazy to fish for himself, he watches the Labour of the Fishing Hawk; and when that diligent Bird has at length taken a Fish and is bearing it to his Nest for the Support of his Mate and young Ones, the Bald Eagle pursues him and takes it from him.
With all this Injustice, he is never in good Case but like those among Men who live by Sharping & Robbing, he is generally poor and often very lousy. Besides he is a rank Coward: The little King Bird not bigger than a Sparrow attacks him boldly and drives him out of the District. He is therefore by no means a proper Emblem for the brave and honest Cincinnati of America who have driven all the King birds from our Country . . .
I am on this account not displeased that the Figure is not known as a Bald Eagle, but looks more like a Turkey. For the Truth, Turkey is in Comparison a much more respectable Bird, and withal a true original Native of America . . . He is besides, though a little vain & silly, a Bird of Courage, and would not hesitate to attack a Grenadier of the British Guards who should presume to invade his Farm Yard with a red Coat on.
Despite Franklin’s objections, the Bald Eagle remained the emblem of the United States. Today it appears on many official seals in addition to the back of 25 cent coin.

The text within the green border is licensed under the GNU Free Documentation License. To see the full article with more information, visit the Wikipedia article “Bald Eagle“. All content outside the green border is copyrighted by McBryde Website Design.

For more information from the USGS (United States Geological Survey)
on the Bald Eagle, click here.