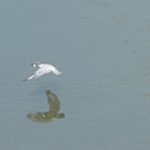 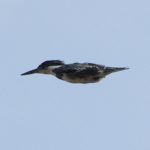 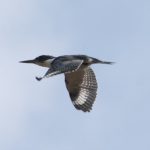 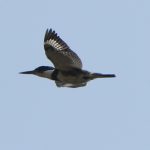 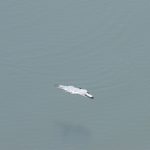 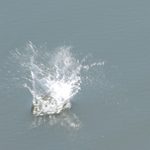 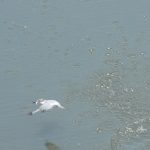 The Belted Kingfisher (Megaceryle alcyon) is a large, conspicuous and noisy kingfisher, the only member of that group commonly found in the northern United States and Canada.

This bird’s breeding habitat is areas near inland bodies of waters or coasts across most of Canada, Alaska and the United States. In the winter, this bird leaves northern inland areas where the water freezes; in other parts of its range, these birds are permanent residents.

Female Belted Kingfisher in flight is 28–32 cm long, with deep blue or bluish-grey plumage with white markings, a shaggy crest and a broad white collar around the neck. As shown in the photo, females have a rusty band along the sides of the belly, making this one of the less common cases found in North America where the female is more decorated than the male.

These birds nest in a horizontal tunnel made in a river bank or sandbank. The female lays 5 to 8 eggs. Both parents excavate the tunnel, incubate the eggs and feed the young.

It is often seen perched prominently on trees, posts, or other suitable watchpoints close to water before plunging in head first after its fish prey. They also eat small crustaceans, frogs, aquatic insects, small mammals, lizards, and berries. These birds often give a rattling call as they fly overhead.

This bird migrates from the northern parts of its range to the southern United States, Mexico, Central America, the West Indies, and northern South America, and has occurred as an extreme rarity in Iceland, Ireland, and the UK.

Its call is a loud, penetrating rattle given on the wing and when perched.

The text within the green border is licensed under the GNU Free Documentation License. To see the full article with more information, visit the Wikipedia article “Belted Kingfisher“. All content outside the green border is copyrighted by McBryde Website Design.

For more information from the USGS (United States Geological Survey)
on the Belted Kingfisher, click here.