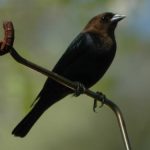 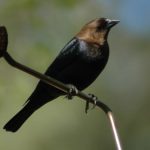 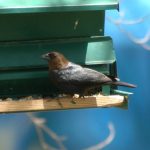 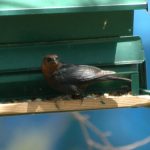 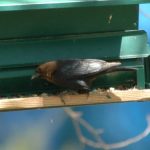 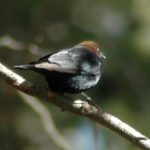 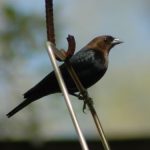 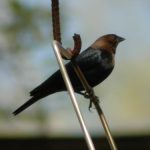 The Brown-headed Cowbird (Molothrus ater) is a small icterid. Adults have a short finch-like bill and dark eyes. The adult male is mainly iridescent black with a brown head. The adult female is grey with a pale throat and fine streaking on the underparts.

Breeding in open or semi-open country across most of North America, this bird is a brood parasite: it lays its eggs in the nests of other small passerines (perching birds), particularly those that build cup-like nests, such as the Yellow Warbler. The young cowbird is fed by the host parents at the expense of their own young.

Brown-headed Cowbirds are permanent residents in the southern parts of their range; northern birds migrate to the southern United States and Mexico. They often travel in flocks, sometimes mixed with Red-winged Blackbirds or European Starlings.

These birds forage on the ground, often following grazing animals such as horses and cows to catch insects stirred up by the larger animals. They mainly eat seeds and insects.

At one time, the Brown-headed Cowbird followed the bison herds across the prairies. Their parasitic nesting behavior complimented this nomadic lifestyle. Their numbers expanded with the clearing of forested areas and the introduction of new grazing animals by settlers across North America. Brown-headed Cowbirds are now commonly seen at suburban birdfeeders.

Brown-headed Cowbird females can lay 36 eggs in a season. Over 140 different species of birds are known to have raised young cowbirds. Host parents may sometimes notice the cowbird egg. Different species react in different ways. Gray Catbirds destroy the egg by pecking it. Some species may simply build a new layer over the bottom of the original nest. Brown-headed cowbird nestlings are sometimes expelled from the nest.

The text within the green border is licensed under the GNU Free Documentation License. To see the full article with more information, visit the Wikipedia article “Brown-headed Cowbird“. All content outside the green border is copyrighted by McBryde Website Design.

For more information from the USGS (United States Geological Survey)
on the Brown-headed Cowbirds, click here.