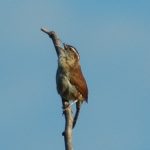 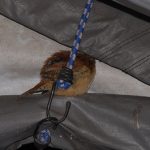 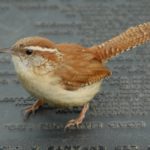 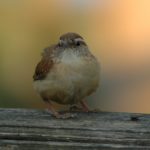 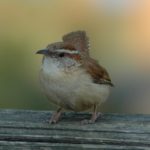 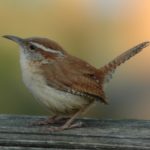 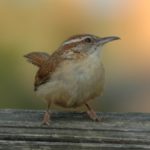 It is a fairly large wren, of the US species, second largest after the Cactus Wren, typically 14 cm long and about 20 g weight. The upperparts are rufous brown, and the underparts a strong orange-buff, usually unmarked but faintly barred on the flanks in the southwest of the range. The head has a striking pure white supercilium (eyebrow) and a whitish throat. The race albinucha is duller brown above has additional white streaking on the head.

It is easiest to confuse with the Bewick’s Wren, which differs in being smaller but with a longer tail, grayer-brown above and whiter below.

Populations in Canada and the northern half of the US experience regular crashes following severe winters, but their high breeding productivity soon results in a return to higher numbers. These birds are generally permanent residents throughout their range and defend territory year round; some birds may wander north after the breeding season.

These birds prefer sites with dense undergrowth, either in mixed forests or in wooded suburban settings. The nest is a bulky, often domed structure, in a natural or artificial cavity. Pairs may mate for life.

These birds eat insects, found in leaf litter or on tree trunks; they may also eat small lizards or tree frogs. In winter, they occasionally eat seeds, berries, and other small fruits.

This is the state bird for South Carolina.

The text within the green border is licensed under the GNU Free Documentation License. To see the full article with more information, visit the Wikipedia article “ Carolina wren“. All content outside the green border is copyrighted by McBryde Website Design.

For more information from the USGS (United States Geological Survey)
on the Carolina wren, click here.