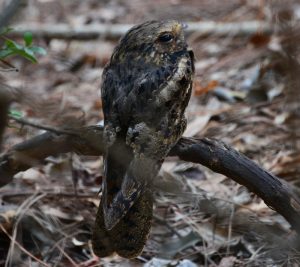 This photo was taken south of Myrtle Beach on a nature trail. They are found around Lake Norman but are rarely seen. They are very hard to distinguish from a Whip-poor-will, which is more common (and smaller) in this area.

The chuck-will’s-widow (Antrostomus carolinensis) is a nocturnal bird of the nightjar family Caprimulgidae. It is found in the southeastern United States near swamps, rocky uplands, and pine woods. It migrates to the West Indies, Central America, and northwestern South America. This bird is generally confused with the better-known whippoorwill (Antrostomus vociferus), due to their similar calls and unusual names. Though rather closely related, they are two distinct species.

Its common name derives from its continuous, repetitive song that is often heard at night. This consist of a series of calls with a vibrating middle note between two shorter notes, not much shifting in pitch. It is slower, lower-pitched and less piercing than the song of the Whip-poor-will. “Chuckwuts-widow” is another common name less often found, but also imitating the rhythm of the bird’s calls. Other alternative names include “Chip-fell-out-of-a-oak”.

It eats primarily insects, particular those active at night such as moths, beetles, and winged ants. It will also eat small birds and bats, swallowing them whole.

Females do not build nests, but rather lay eggs on patches of dead leaves on the ground. The eggs, which are pink with spots of brown and lavender, are subsequently incubated by the female.

The text within the green border is licensed under the GNU Free Documentation License. To see the full article with more information, visit the Wikipedia article “Chuck-wills-widow“. All content outside the green border is copyrighted by McBryde Website Design.

For more information from the USGS (United States Geological Survey)
on the Yellow-breasted Chat, click here.