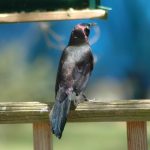 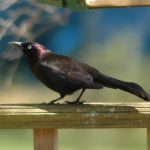 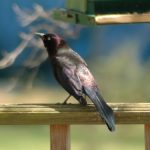 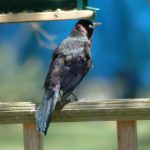 The Common Grackle, Quiscalus quiscula, is a large blackbird. The 32 cm long adults have a long dark bill, a pale yellowish eye, and a long tail; their plumage is an iridescent black. Adult females are slightly smaller and less glossy.

Their breeding habitat is open and semi-open areas across North America east of the Rocky Mountains. The nest is a well-concealed cup in dense trees or shrubs, usually near water; sometimes, they will nest in cavities or in man-made structures. They often nest in colonies, some being quite large.

This bird is a permanent resident in much of its range. Northern birds migrate in flocks to the southeastern United States.

These birds forage on the ground, in shallow water or in shrubs; they will steal food from other birds. They are omnivorous, eating insects, minnows, frogs, eggs, berries, seeds and grain, even small birds.

This bird’s song is particularly harsh, especially when a flock of these birds is calling.

The range of this bird expanded west as forests were cleared. In some areas, they are now considered a pest by farmers because of their large numbers and fondness for grain

The text within the green border is licensed under the GNU Free Documentation License. To see the full article with more information, visit the Wikipedia article “ Common Grackle “. All content outside the green border is copyrighted by McBryde Website Design.

For more information from the USGS (United States Geological Survey)
on the Common Grackle, click here.