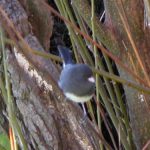 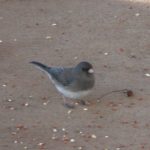 The Dark-eyed Junco, Junco hyemalis, is the best-known species of junco, a genus of small American sparrows. Adults are generally grey on top with a white belly. The white outer tail feathers flash distinctively in flight. The bill is usually pinkish. The males tend to have darker, more conspicuous markings than the female. Juveniles often have pale streaks and may even be mistaken for a Vesper Sparrow until they acquire adult plumage at 2 to 3 months. There are several regional variations:

The Slate-colored Junco (J. hyemalis hyemalis) has a dark slate-grey head, breast, and upper parts. Females are brownish grey. It is found in North America in taiga forests from Alaska to Newfoundland and south to the Appalachian Mountains, wintering further south; it is relatively common in its range.
The White-winged Junco (J. hyemalis aikeni) has a grey head, breast and upper parts with white wing bars. Females are brownish grey. It is found in the mid-western United States in the Black Hills of South Dakota and Wyoming, and is relatively rare.
The Oregon Junco (J. hyemalis oreganus) is found on the Pacific coast mountains from southeastern Alaska to extreme northern Baja California. It has (see photo, right) a blackish-gray head and breast with a brown back and wings and reddish flanks. This is the most common form in the west.
The Pink-sided Junco (J. hyemalis mearnsi) has a grey head and breast, with a brown back and wings. It has pinkish-brown flanks. It is found in the northern Rocky Mountains from southern Alberta, Canada to Idaho and Wyoming in the northern United States.
The Gray-headed Junco (J. hyemalis caniceps) is found in the southern Rocky Mountains from Colorado to central Arizona. It is mainly grey on top with a rusty back, similar to the Yellow-eyed Junco except having dark eyes like the other races of J. hyemalis.
The Red-backed Junco (J. hyemalis dorsalis) is found in the southern mountains of Arizona and New Mexico. It has a dark upper mandible and rust-color on the wings, making it still more similar to the Yellow-eyed Junco, with which it does not overlap in breeding range.
Their breeding habitat is coniferous or mixed forest areas throughout North America. They usually nest in a cup-shaped depression on the ground, well hidden by vegetation or other material, although they are sometimes found in the lower branches of a shrub or tree. The nests have an outer diameter of about 10cm and are lined with fine grasses and hair.

Normally two broods of 4 eggs are laid during the breeding season. They are incubated by the female for 12 to 13 days. The slightly glossy egg shells are greyish or pale bluish-white in color and heavily spotted (sometimes splotched) with various shades of brown, purple or grey. The spotting is concentrated at the large end of the egg. Young leave nest between 11 and 14 days of hatching.

Northern birds migrate further south; many populations are permanent residents or altitudinal migrants. In winter, juncos are familiar in and around towns. The Slate-coloured Junco is a rare vagrant to western Europe and has wintered in Great Britain, usually in a domestic garden.

These birds forage on the ground. In winter, they often forage in flocks that may comprise several races. They mainly eat insects and seeds.

The song is a trill similar to the Chipping Sparrow’s, except that the Red-backed’s song is more complex, similar to the Yellow-eyed Junco’s. Calls include “tick” sounds and very high-pitched tinkling chips. A sample of their song can be heard at the USGS web site or at the Cornell University Ornithology Lab web site. (Requires the RealPlayer)

The text within the green border is licensed under the GNU Free Documentation License. To see the full article with more information, visit the Wikipedia article “Dark-eyed Junco“. All content outside the green border is copyrighted by McBryde Website Design.

For more information from the USGS (United States Geological Survey)
on the Dark-eyed Junco, click here.