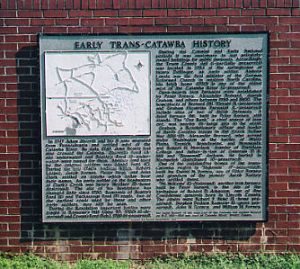 In 1717, Adam Sherrills and his 8 sons migrated from Pennsylvania and settled west of the Catawba River. By July 1749, John Beatty had also crossed the Catawba. Sherrill’s Ford (A-site underwater) and Beatty’s Ford (B-underwater) were named for them. Another ford used by the original settlers was Island Ford (C). During the late 1740’s Andreas Killen, Robert Leeper, Jacob Forney, Pieter Heyl, and John Clark settled on creeks which today bear their names. An early settler on the headwaters of Clark’s Creek was Henry Weidner (D-home destroyed). The site of his home place has changed little since 1750. Remnants of Beatty’s Ford (E) and Tuckaseege Ford (F) roads, two of the earliest roads used by these and other early settlers, may still be seen.

During the Revolution, important battles were fought at Ramsour’s Mill (June 20, 1780) (G-destroyed) and Cowan’s Ford (Feb. 1, 1780) (H-preserved). During the Colonial and Early National periods, it was customary to use privately owned buildings for public purposes. Accordingly, the Tryon County Jail (I-partially preserved) was located in 1784 at the spring house of Henry Dellinger, an early settler. Andrew Loretz was the first minister of the German Reformed Church in western North Carolina. His brick home (1793) is one of the oldest west of the Catawba River (J-preserved).

Open-hearth iron furnaces were established by Peter Forney, Alexander Brevard, Joseph Graham and others between 1785 and 1800. The home places of Brevard (Mt. Tirzah) (K-preserved) and Graham (Vesuvius Furnace) (L-preserved) include sites of two of these furnaces. A third furnace (M) built by Peter Forney still stands. The ‘Ore Bank’, a chief source of iron ore was nearby (N-large pits to be seen). Graham, a Revolutionary officer and leader of North Carolina troops in the Creek Indian War (1811-1812): Alexander Brevard, who served under Washington at the battles of White Plains, Trenton, Brandywine and Monmouth: and Robert H. Morrison, founder of Davidson College and father-in-law of Generals D. H. Hill and ‘Stonewall’ Jackson. He is buried in Machpelah churchyard (O-preserved). One of the outstanding homes of the trans-Catawba region is ‘Ingleside’ (P-preserved), built by Daniel M. Forney, son of Peter Forney and grandson of the pioneer Jacob Forney who settled there.