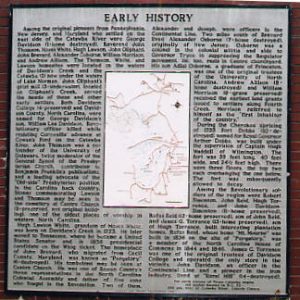 Among the original pioneers from Pennsylvania, New Jersey and Maryland who settled on the east side of the Catawba River were George Davidson (1-home destroyed), Reverend John Thomson, Moses White, Hugh Lawson, John Oliphant, John Brevard, Alexander Osborne, William Morrison, and Andrew Allison. The Thomson, White and Lawson home sites were located on the waters of Catawba (2) now under the waters of Lake Norman. John Oliphant’s grist mill (3-underwater), located on Oliphant’s Creek, served the needs of these and other early settlers. Both Davidson College (4-preserved) and Davison County, North Carolina, were named for George Davidson’s son, William Lee Davidson, Revolutionary officer killed while resisting Cornwallis’ advance at Cowan’s Ford on the Catawba River. John Thomson was the co-founder of the University of Delaware, twice moderator of the General Synod of the Presbyterian Church, contributor to Benjamin Franklin’s publications and a leading advocate of the ‘Old-side’ Presbyterian position in the Carolina backcountry. Stones commemorating Lawson and Thomson may be seen in the cemetery at Centr Church (5-preserve, not original building), one of the oldest places of worship in western North Carolina.

Hugh Lawson White, grandson of Moses White was born on Davidson’s Creek in 1773. He later moved to Tennessee, where he became a United States Senator and in 1836 presidential candidate on the Whig ticket. The home place of John Brevard, who migrated from Cecil County, Maryland, was known as ‘Purgatory’ (6-destroyed). His tombstone may be seen at Centre Church. He was one of the Rowan County’s three representatives in the North Carolina Colonial Assembly and father of five sons who fought in the Revolution. Two of them, Alexander and Joseph, were officers in the Continental Line. Two miles south of Brevard lived Alexander Osborne (7-home destroyed), originally of New Jersey. Osborne was a colonel in the colonial militia and side to Governor Tryon in suppressing the Regulator movement. He, too, rests in Centre churchyard. His son, Adial Osborn, a graduate of Princeton, was one of the original trustees of the University of North Carolina. Andrew Allison (8-home destroyed) and William Morrison (9-grave preserved) received the earliest land grants issued to settles along Forth Creek. Morrison referred to himself as the “first inhabitor of the country”.

During the Cherokee uprising of 1755 Fort Dobbs (10-destroyed), named for Royal Governor Arthur Dobbs, was built under the supervision of Captain Hugh Waddell of Wilmington. The fort was 55 feet long, 40 feet wide, and 24′ feet high. There were three floors, the top two each overhanging the other below. The fort was subsequently allowed to decay.

Among the Revolutionary soldiers of the region were Robert Simonton, John Reid, Hugh Torrance and John Davidson Simonton (11-home preserved), Rufus Reid (12-home preserved), son of John Reid, and James G. Torrance (13-home preserved), son of Hugh Torrance, built interesting plantation homes. Rufus Reid, whose home ‘Mt. Mourne’ was built in 1836 on the site of ‘Purgatory’, was a member of the North Carolina House of Commons in 1844 and 1846. James G. Torrance was one of the original trustees of Davidson College and operated the only store in the vicinity. John Davidson, an officer in the Continental Line and a pioneer in the iron industry, lived at ‘Rural Hill’ (14-destroyed).