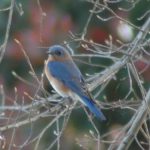 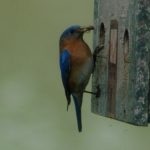 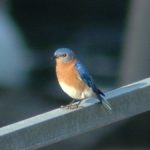 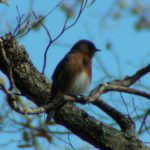 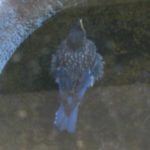 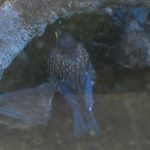 The Eastern Bluebird, Sialia sialis, is a medium-sized thrush found in open woodlands, farmlands, and orchards.

Adults have a white belly. Adult males are bright blue on top and have a red throat and breast. Adult females have duller blue wings and tail, a brownish throat and breast and a grey crown and back. Eastern Bluebirds are found in the Eastern US as the name implies.

The population of the Eastern Bluebird in the US declined seriously in the US and became critical in the middle of the 1900s. The decline was due to:

Fortunately, the species was rescued by a network of birding enthusiasts who erected nesting boxes for Bluebirds, with close monitoring necessary to prevent House Sparrows from nesting in them. They remain threatened, however, with competition still prevalent from other species and in certain states of the US they are difficult to spot.

The Bluebird is the state bird of Missouri and New York.

The text within the green border is licensed under the GNU Free Documentation License. To see the full article with more information, visit the Wikipedia article “Eastern Bluebird“. All content outside the green border is copyrighted by McBryde Website Design.

For more information from the USGS (United States Geological Survey)
on the Eastern Bluebird, click here.