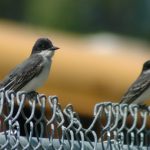 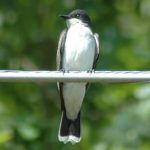 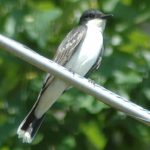 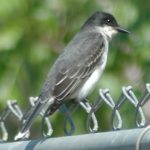 The Eastern Kingbird, Tyrannus tyrannus, is a large Tyrant flycatcher. Adults are grey-black on the upperparts with light underparts; they have a long black tail with a white end and long pointed wings. They have a red patch on their crown, seldom seen. The call is a high-pitched unmusical chirp.

Their breeding habitat is open areas across North America. They make a sturdy cup nest in a tree or shrub, sometimes on top of a stump or pole. These birds aggressively defend their territory, even against much larger birds.

These birds migrate in flocks to South America.

They wait on an open perch and fly out to catch insects in flight, sometimes hovering to pick food off vegetation. They also eat berries and fruit, mainly in their wintering areas.

Some Eastern Kingbirds place their nests in the open while others hide nests very well. Eastern Kingbirds in Southern British Columbia can nest in open fields; in shrubs over open water; high in tall trees and even in the tops of small stumps. It has been shown that those pairs that hide their nests well tend to be less aggressive towards intruders near the nest (perhaps relying on nest cover), while pairs that nest in the open tend to be more overtly aggressive to intruders. Both male and female participate in nest defense, but females may stay on well-hidden nests longer than females with open nests who may leave nests earlier to chase away predators. Those pairs nesting in the open may be able to see predators coming earlier and rely on aggressive behavior to protect their young.

The text within the green border is licensed under the GNU Free Documentation License. To see the full article with more information, visit the Wikipedia article “Eastern_Kingbird“. All content outside the green border is copyrighted by McBryde Website Design.

For more information from the USGS (United States Geological Survey)
on the Eastern Kingbird, click here.