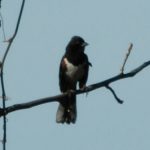 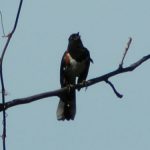 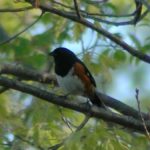 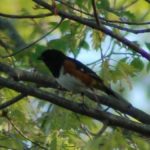 The Eastern Towhee, Pipilo erythrophthalmus, is a large sparrow. The taxonomy of the towhees has been under debate in recent decades, and formerly this bird and the Spotted Towhee were considered a single species, the Rufous-sided Towhee, sometimes called a chewink.

Adults have rufous sides, a white belly and a long dark tail with white edges. The eyes are red, white for birds in the southeast. Males have a dark head, upper body, and tail; these parts are brown in the female.

Their breeding habitat is brushy areas across eastern North America. They nest either low in bushes or on the ground under shrubs.

There has been one record of this species as a vagrant to western Europe; a single bird in Great Britain in 1966.

These birds forage on the ground or in low vegetation. They mainly eat insects, acorns, seeds, and berries.

The call is Drink your teeeee; the word “towhee” imitates this call.

The text within the green border is licensed under the GNU Free Documentation License. To see the full article with more information, visit the Wikipedia article “Eastern Towhee“. All content outside the green border is copyrighted by McBryde Website Design.

For more information from the USGS (United States Geological Survey)
on the Eastern Towhee , click here.