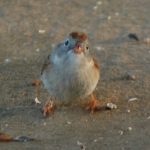 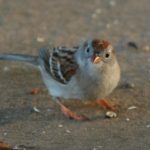 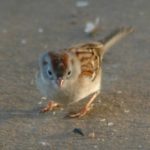 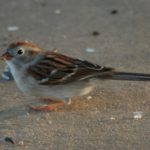 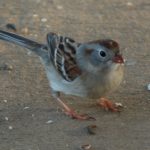 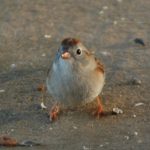 The Field Sparrow, Spizella pusilla, is a small sparrow. Adults have brown upperparts, a light brown breast, a white belly, wing bars, and a forked tail. They have a grey face, a rusty crown, a white eye ring, and a pink bill.

Their breeding habitat is shrubby fields across eastern North America. The nest is an open cup on the ground under a clump of grass or in a small thicket.

These birds are permanent residents in the southern parts of their range. Northern birds migrate to the southern United States and Mexico.

These birds forage on the ground or in low vegetation, mainly eating insects and seeds. They may feed in small flocks outside of the nesting season.

The male sings from a higher perch, such as a shrub or fencepost, to indicate his ownership of the nesting territory. The song is a series of sad whistles ending in a trill.

This bird’s numbers expanded as settlers cleared forests in eastern North America, but may have declined in more recent times.

The text within the green border is licensed under the GNU Free Documentation License. To see the full article with more information, visit the Wikipedia article “Field Sparrow”. All content outside the green border is copyrighted by McBryde Website Design.

For more information from the USGS (United States Geological Survey)
on the Field Sparrows, click here.