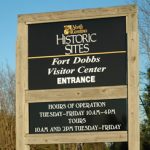 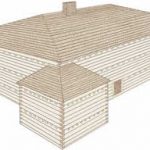 In early 1754, France was attempting to connect her extensive dominions in North America by uniting Canada with Louisiana. In the process, she took possession of lands claimed by England to be within the Province of Virginia and began a line of military posts from the Great Lakes to the Ohio Valley. North Carolina was the first colony to respond to Virginia Governor Dinwiddie’s call for military assistance, which marked the first time a British colony voted to support troops outside of its own borders in behalf of a common cause and defense.

To defend local settlers on the western frontier, North Carolina’s legislature provided for a fort to be built in 1755. In December 1756 the only known contemporary description of Fort Dobbs said it was:

“A good and Substantial Building of the Dimensions following (that is to say) The Oblong Square fifty three feet by forty, the opposite Angles Twenty four feet and Twenty-two, In height Twenty four and a half feet as by the Plan annexed Appears, The Thickness of the Walls which are made of Oak Logs regularly Diminished from sixteen Inches to Six, it contains three floors and there may be discharged from each floor at one and the same time about one hundred Muskets the same is beautifully situated in the fork of Fourth Creek a Branch of the Yadkin River.”

The fort served as the military headquarters for the frontier company (approximately fifty men) and a base from which to maintain patrols of the surrounding country. The fort was attacked on the night of February 27, 1760, when more than seventy Cherokees were repelled. One colonial boy was killed, two soldiers and one volunteer injured and approximately twelve Cherokee were wounded and killed.

By the end of 1761, the British had essentially won the war and only thirty troops remained at the fort. Colonial leaders disbanded them as settlement quickly moved further to the west. The neglected fort was in ruins by 1766.

Today, Fort Dobbs State Historic Site preserves the site of the original fort. Living History demonstrations are offered daily Tue.-Sat. from 10:00 until 4:00 and several special events with encampments of soldier occur throughout the year.

Visit our Photo Gallery for more photos of Fort Dobbs

Back to historical sites