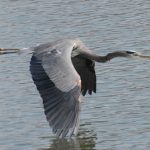 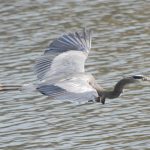 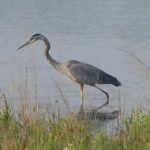 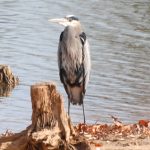 The Great Blue Heron, Ardea herodias, is a wading bird of the heron family Ardeidae, common all over North and Central America as well as the West Indies and the Galápagos, except in deserts and high mountains where there is no water for it to wade in. It is very similar to the European Grey Heron. This is the largest North American heron.

This species usually breeds in colonies in trees close to lakes or other wetlands, often with other species of herons. It builds a bulky stick nest. The female lays 3 to 5 pale blue eggs. Both parents feed the young at the nest by regurgitating food.

It feeds in shallow water or at the water’s edge and spears fish or frogs with its long, sharp bill. Its varied diet can also include insects, snakes, turtles, rodents and small birds. It will also raid goldfish ponds in back yards.

The Great Blue stands 132 cm (four feet) tall, has a 213 cm (seven-foot) wingspan and weighs 2.5 kg. It has a long yellow bill. Adults have blue-grey wings and back and a white head with a black cap and a long black plume. In flight, the long neck is held in an S-shape with the long legs trailing behind. This bird flies with strong deliberate wing beats.

Birds east of the Rockies in the northern part of their range are migratory and winter in Central America or northern South America. From the southern United States southwards and on the Pacific coast, they are year-round residents.

The call of this bird is a harsh croak.

The Great White Heron, which was long thought to be a separate species, is a white morph of Great Blue which occurs in southern Florida. It is mainly found near salt water. Wurdemann’s Heron is an intermediate morph, in which only the head is white.

The text within the green border is licensed under the GNU Free Documentation License. To see the full article with more information, visit the Wikipedia article “Great Blue Heron“. All content outside the green border is copyrighted by McBryde Website Design.