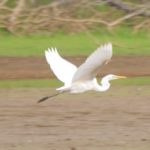 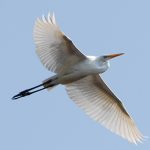 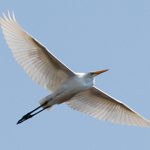 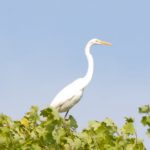 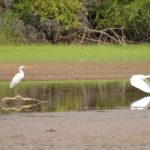 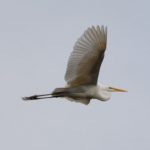 The Great Egret Ardea alba, also known as the Great White Egret, White Heron, or Common Egret, is a wading egret, found in most of the tropical and warmer temperate parts of the world, although it is very local in southern Europe and Asia. It is called Kōtuku in New Zealand. It is sometimes confused with the Great White Heron in Florida, which is a white morph of the Great Blue Heron.

The Great Egret is a large bird with all white plumage that can reach 101 cm in height and weigh up to 950 g. It is only slightly smaller than the Great Blue or Grey Herons. Apart from size, the Great Egret can be distinguished from other white egrets by its yellow bill and black legs and feet. It also has a slow flight, with its neck retracted. This is characteristic of herons and bitterns and distinguishes them from storks, cranes, and spoonbills, which extend their necks.

The Great Egret feeds in shallow water or drier habitats, spearing fish, frogs or insects with its long, sharp bill. It will often wait motionless for prey, or slowly stalk its victim. It is a conspicuous species, usually easily seen.

The Great Egret is partially migratory, with northern hemisphere birds moving south from areas with cold winters. It breeds in colonies in trees close to large lakes with reed beds or other extensive wetlands. It builds a bulky stick nest. The call at breeding colonies is a loud croaking “cuk cuk cuk”.

The text within the green border is licensed under the GNU Free Documentation License. To see the full article with more information, visit the Wikipedia article “Great Egret“. All content outside the green border is copyrighted by McBryde Website Design.

For more information from the USGS (United States Geological Survey)
on the Great Egret, click here.