Hydrilla is considered the most problematic aquatic plant in the United States.

Hydrilla is a submersed plant. It can grow to the surface and form dense mats thick enough for ducks to walk on. It was first found in Lake Norman in 2000 and is spreading rapidly.

Hydrilla stems are slender, branched and up to 25 feet long. Hydrilla’s small leaves are strap-like and pointed. They grow in whorls of four to eight around the stem. The leaf margins are distinctly saw-toothed. Hydrilla often has one or more sharp teeth along the length of the leaf mid-rib. Hydrilla produces tiny white flowers on long stalks. It also produces 1/4 inch turions at the leaf axils and potato-like tubers attached to the roots in the mud.  There are several Hydrilla “look alkies”.  There is more information about them near the bottom of this page.

Why is Hydrilla a problem?

How to Control Hydrilla

Once Hydrilla becomes established, eradication is often not possible.  The treatment required to control infestations within levels that would permit continued use of lakes and streams is difficult and expensive.

Herbicides and mechanical harvesters provide some control of Hydrilla, but both are expensive and regrowth can be rapid requiring repeated treatments. NOTE: The Catawba Riverkeeper Foundation, Catawba Riverkeeper, and The Lake Norman Covekeepers DO NOT support herbicides as a control method!

The most cost-effective, long term control of Hydrilla is the use of sterile grass carp, Ctenopharyngodon idella.  When this herbivorous fish is stocked at rates of up to 20 fish per acre of Hydrilla, control can generally be obtained in one or two years.  Once control is obtained, maintenance stockings of grass carp are required to maintain control in subsequent years.  Click here for more info about Grass Carp used to control the Hydrilla on Lake Norman.

Whole-lake management of hydrilla with grass carp is certainly possible, however, the “getting there” will be exceedingly challenging.  An estimate of grass carp management costs of hydrilla on Lake Norman could easily be based on 160,000 fish (8000 potential hydrilla acres times 20 fish per acre) at $4.00 a fish. Supplemental stocking (~25% of the original stocking) would be required every two years or so to maintain a viable weed eating population of grass carp. Management of hydrilla is a long-term
commitment.

Following a time-consuming hydrilla distribution assessment by Lake Norman’s Duke Power’s Mosquito Control Teams, hydrilla is now scattered over approximately 18 square miles of lake surface area.  This is an increase of 14 square miles from last year. The key word is scattered. It is not covering 18 square miles of lake surface. The plant is growing in individually scattered sprigs, small clumps to large clumps and complete cove coverage depending on the location.

The photo below shows the mosquito habitat and muck that can be created by Hydrilla (photo taken at Mountain Island Lake July 2002). 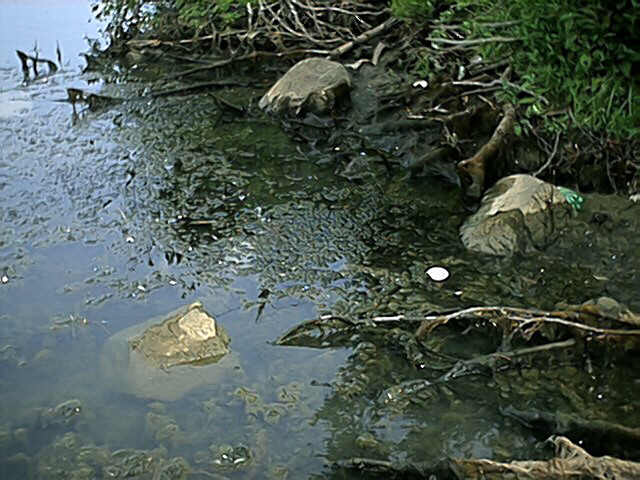