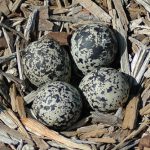 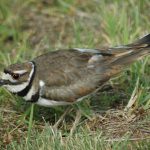 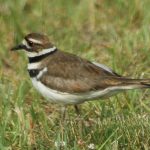 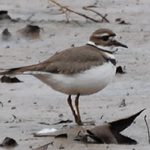 The Killdeer (Charadrius vociferus) is a medium-sized plover. Adults have a brown back and wings, a white belly, and a white breast with two black bands. The rump is tawny orange. The face and cap are brown with a white forehead. They have an orange-red eyering. The chicks are patterned almost identically to the adults and are precocial — able to move around right after hatching. The killdeer frequently uses a “broken wing act” to distract predators from the nest.

Their breeding habitat is open fields or lawns, often quite far from water, across most of Canada, the United States, and Mexico, with isolated populations in Costa Rica and Peru. Killdeer nest on open ground, often on gravel. They may use a slight depression in the gravel to hold the eggs, but they do not line it at all or line it only with a few stones. Since there is no structure to stand out from its surroundings, a killdeer nest blends marvelously into the background. Furthermore, the speckled eggs themselves look like stones.

Killdeer hatchlings are precocial birds like many other waders. Birds which hatch blind, naked, and helpless are called altricial. Most birds are born altricial and utterly rely on their parents to bring them food.

Precocial birds stay in the egg twice as long as altricial birds, so they have more time to develop. A one-day-old killdeer chick is actually two weeks more developed than a one-day-old American robin nestling. Although adult robins and killdeer are the same sizes, a killdeer’s egg is twice the size of a robin’s. There is more nourishment in the killdeer egg, to sustain the embryo for its long time in the shell.

They are migratory in northern areas and winter as far south as northern South America. They are rare vagrants to western Europe, usually late in the year.

These birds forage for food in fields, mudflats, and shores, usually by sight. They mainly eat insects.

Their name comes from their frequently heard call. These birds will frequently use the “broken-wing act” to distract predators from their nests. This involves the bird walking away from its nesting area holding its wing in a position that simulates an injury and then flapping around on the ground emitting a distress call. The predators then think they have easy prey and are attracted to this seemingly injured bird and away from the nest. If the parent sees that a potential predator is not following them, they will move closer and get louder until they get the attention of the predator.

Their ability to exploit a wide range of agricultural and semi-urban habitat has helped keep them common and widespread in their range.

The text within the green border is licensed under the GNU Free Documentation License. To see the full article with more information, visit the Wikipedia article “Killdeer“. All content outside the green border is copyrighted by McBryde Website Design.

For more information from the USGS (United States Geological Survey)
on the Killdeer, click here.