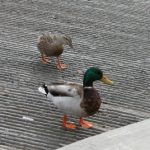 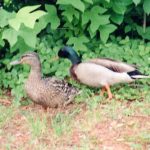 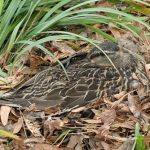 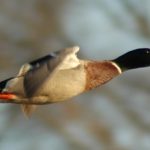 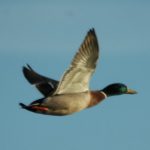 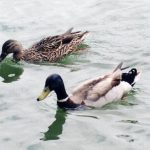 The Mallard (Anas platyrhynchos (litt: flat billed duck)), also known in North America as the Wild Duck, is a common and widespread dabbling duck which breeds throughout the temperate and sub-tropical areas of North America, Europe, and Asia. It also frequents Central America and the Caribbean. It is probably the best-known of all ducks.

This dabbling duck is 56-65 cm length, with an 81–98 cm wingspan, and weighs 750–1000 g. It is strongly migratory in the northern parts of its breeding range, and winters farther south. It is highly gregarious outside of the breeding season and will form large flocks. They are exceptionally fast flyers for their size, reaching speeds of 40mph. Due to their streamlining, however, it hardly ruffles a feather.

The breeding male is unmistakable, with a green head, black rear end and a blue speculum edged with white, obvious in flight or at rest. Males also possess a yellow bill with a black tip, whereas females have a dark brown bill.

The females are light brown, with plumage much like most female dabbling ducks. They can be distinguished from other ducks, by the distinctive speculum. In non-breeding (eclipse) plumage, the drake looks more like the female.

It is a bird of most wetlands, including parks, small ponds, and rivers, and usually feeds by dabbling for plant food or grazing. It nests usually on a river bank, but not always particularly near water.

This is a noisy species. The male has a nasal call, whereas the female has the very familiar “quack” always associated with ducks.

Mallards frequently interbreed with the American Black Duck, Northern Pintail and domesticated species, leading to various hybrids. A Mallard has been recorded as living for 29 years.

The Greenland subspecies of the Mallard is one of the rare examples of both Allen’s Rule and Bergmann’s Rule in birds. Bergmann’s Rule—polar subspecies/species tend to be larger than related ones from warmer climates—has numerous examples in birds. Examples of Allen’s Rule—appendages like ears tend to be smaller in polar subspecies/species to minimize heat loss and large in tropical and desert equivalents to facilitate heat diffusion, and the polar taxa are stockier overall—are rare, as birds don’t have ears. However, the bill of ducks is very well supplied with blood vessels and vulnerable to cold. Thus, the Greenland Mallard, although considerably larger than the nominate subspecies, has a smaller bill and is stockier.

The text within the green border is licensed under the GNU Free Documentation License. To see the full article with more information, visit the Wikipedia article “Mallard“. All content outside the green border is copyrighted by McBryde Internet Consulting.

For more information from the USGS (United States Geological Survey)
on the Mallard, click here.