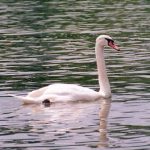 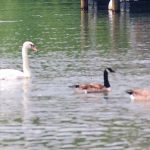 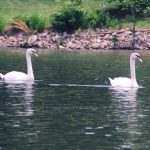 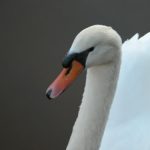 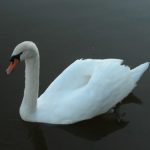 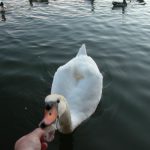 Mute Swans are very rare on Lake Norman but there are a few around.

These swans are beautiful but controversial birds. They are native to Europe and Asia, not the US. Originally brought to the US in the 19th century, their population has been booming in the last few years. It is very rare to see Mute Swans this far south. Most are found from Virginia north.

It is unlawful for any individual to release any mute swan (Cygnus olor) into the public waters of North Carolina. Any individual who releases a mute swan to privately controlled waters must ensure that the animal has been pinioned.
Individuals who currently possess or confine mute swans on their property must pinion all mute swans on their property by January 1, 2009. For the purposes of this Rule privately controlled waters is defined as a body of water lying wholly upon a single tract of privately owned land or a body of water lying entirely within private property, even if that property is comprised of multiple tracts owned by one or multiple individuals. In addition, privately controlled waters are waters to which the public does not have access without permission of one or more of the private landowners surrounding the water(s).

This bird is found naturally mainly in temperate areas of Europe and western Asia. It is not migratory, although some populations must move in winter when waterways and lakes freeze. They are sometimes found at the coast, particularly in winter, rather than solely being birds of inland waters.

For aesthetic reasons, this species is often kept in captivity, in areas where it is not native, in order to decorate parks and ponds. The descendants of such birds have become naturalized in the eastern United States and Great Lakes, much as the Canada Goose has done in Europe. In some locations, such as Chesapeake Bay, the numbers of these feral birds have increased to the point where they are considered pests because they compete with native birds for habitat and food.

Its size, orange-reddish bill, and white plumage make this swan almost unmistakable. The most similar species is Whooper Swan, but that has a yellow and black bill, and lacks the curved “swan” neck, is longer and heavier and lacks the characteristic projection above the bill.

Young birds, called “cygnets”, are not the bright white of mature adults, and lack the bright orange bill. The color of the down may be a dull white or gray, and controversy exists over whether the color is related to their gender.

Mute Swans nest on large mounds that they build in the middle of a shallow lake. These monogamous birds reuse the same nest each year, restoring or rebuilding it as needed. Male and female swans share the care of the nest, and once the cygnets are fledged it is not uncommon to see whole families looking for food. They feed on submerged aquatic vegetation, reached with their long bills.

Although this bird can be tamed, especially to those who feed it daily, it is aggressive in defense of its nest, and its size and impressive hissing make it a formidable adversary for animals as large as a fox; a grunt, on the other hand, maybe a positive signal. There have been many reports of Mute Swans attacking people who enter their territory.

However, the Mute Swan is less vocal than the noisy Whooper and Bewick’s Swans; the most familiar sound associated with Mute Swan is the whooshing of the wings in flight once this bird has laboriously taken off from the water. The phrase Swan song refers to this swan and to the completely false, famous, ancient legend that it is utterly silent until the last moment of its life, and sings one achingly beautiful song just before dying.

Unlike Black Swans, Mute Swans are strongly territorial. The familiar pose with neck curved back and wings half raised is a threat display.

The Mute Swan is protected in most of its range, but this has not prevented illegal hunting and poaching.

Trivia
A pair of swans creating a “lovers’ heart”The Mute Swan is the national bird of the Kingdom of Denmark.
All Mute Swans in the UK (with the possible exception of those in Orkney and Shetland) are considered the property of the British monarch, except for flocks owned by the Vintners’ and Dyers’ Companies. See Swan Upping.
The Mute Swans in the moat at The Bishops Palace at Wells Cathedral in Wells, England have for centuries been trained to ring bells via strings attached to them to beg for food. Two Swans are still able to ring for lunch. Bell Ringing Swans Of Wells, England Official Website.
There is rich iconographic and literary evidence for Celtic bird-goddesses who took the form of swans. Similarly, swans are highly revered in Hinduism (see the trivia section of a swan). The Roman Julius Caesar noted that the British tribes thought wild geese and swans “unlawful” to eat or kill. By medieval times, though, swans were considered an edible form of poultry. Nowadays they are a protected species in many countries.
The noise a swan makes was uniquely known as a beable, but this word has fallen into disuse in all but a few parts of Britain. Both the Ancient Britons and the Anglo-Saxons believed that a swan’s wings throbbed and sang with a human voice when they flew.
Mute Swans mate for life and when mating can seemingly provide a picture of a lovers’ heart.

It has become clear that a Mute Swan was the first species of bird to have died from the H5N1 ‘Avian Flu’ virus in the UK, its carcass being found in Cellardyke, Fife in Scotland in March 2006. This was officially confirmed on April 6, 2006.

The text within the green border is licensed under the GNU Free Documentation License. To see the full article with more information, visit the Wikipedia article “Mute Swan“. All content outside the green border is copyrighted by McBryde Website Design.

For more information from the USGS (United States Geological Survey)
on the Mute Swans, click here.

Below are links with additional information.