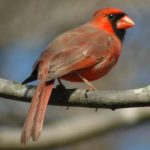 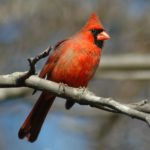 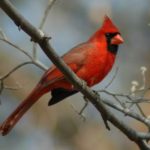 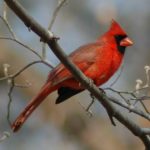 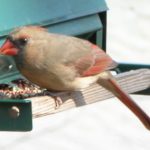 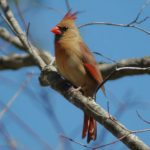 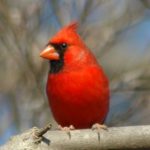 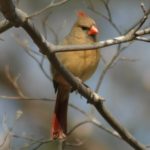 The Northern Cardinal (Cardinalis cardinalis) is a member of the cardinal family of birds in North America. The bird’s name comes from the red-robed Roman Catholic Cardinals. Its crested head is also said to resemble a bishop’s mitre. Cardinals have been also referred to as redbirds and Virginia nightingales. Cardinals were once popular cage birds for their bright color and rich, varied songs.

What they eat
They eat mostly seeds, fruits, wastes, small animals, and insects. Cardinals almost always come in pairs; if one is seen, its mate will usually be nearby.

Abundancy
Cardinals are abundant across the eastern United States from Maine to Texas and in Canada in the provinces of Ontario, Quebec, and Nova Scotia. Their range extends west to the U.S.-Mexico border and south through Mexico to the Isthmus of Tehuantepec, northern Guatemala, and northern Belize. They have been introduced in Bermuda, Hawaii, and Southern California. Their natural habitats are woodlands, suburbs, gardens, swamps, and thickets.

Mating
The male sings in a loud, clear whistle from a treetop to defend his territory, which he jealously guards. He will chase off other males. The pair sometimes sing together before nesting and the male may feed his mate. The female builds a cup nest in a well-concealed spot in dense shrub or a low tree. Both feed the young. Young fledged cardinals resemble adult females in coloring. The male will grow in bright red feathers as he matures and is eventually chased away by his sire.

These birds are permanent residents throughout their range, although they may relocate to avoid extreme weather or if food is scarce.

As State birds
In the US, the Northern Cardinal is the state bird of North Carolina, West Virginia, Ohio, Illinois, Indiana, Kentucky, and Virginia. Nationwide, this species receives special legal protections under the Migratory Bird Treaty Act of 1918, which also banned their sale as cage birds. In America, the bird is often associated with the Christmas season, appearing on many cards and decorations.

The text within the green border is licensed under the GNU Free Documentation License. To see the full article with more information, visit the Wikipedia article “Northern Cardinal“. All content outside the green border is copyrighted by McBryde Website Design.

For more information from the USGS (United States Geological Survey)
on the Northern Cardinal, click here.