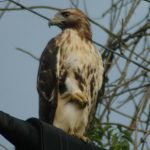 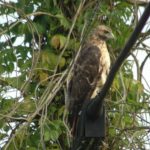 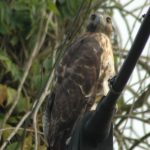 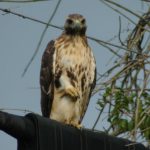 This is one of three species colloquially known in the United States as the Chickenhawk. It is the most common North American hawk and the raptor most frequently taken from the wild (and later returned to the wild) for falconry in the United States.

Birds of this species have a dark mark along the leading edge of the underwing, between the body and the wrist (the patagium). Most but not all color variations have a dark band across the belly. In most, the adults’ tails are rusty red above, and juveniles have narrow brown and pale bands. The main western North American population has bands on the adults’ rusty tails as well and has varied plumage, organized into three main color types or morphs.

Immature birds, or birds that are only a few years old, can also readily be identified by having yellowish irises. As the bird attains full maturity over the course of 3-4 years, the iris slowly darkens into a reddish-brown hue.

The text within the green border is licensed under the GNU Free Documentation License. To see the full article with more information, visit the Wikipedia article “Red-tailed Hawk“. All content outside the green border is copyrighted by McBryde Website Design.

For more information from the USGS (United States Geological Survey)
on the Red-tailed Hawk.