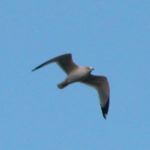 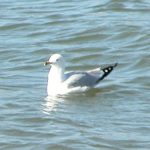 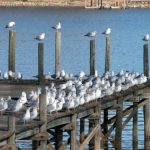 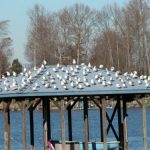 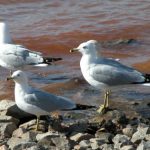 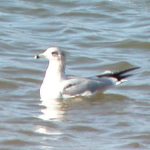 The Ring-billed Gull (Larus delawarensis) is a medium-sized gull. Adults are 49cm length and with a 124cm wingspan. They have a white head, neck and underparts and a relatively short, yellow bill with a dark ring. The back and wings are silver-grey and they have yellow legs. Their eyes are yellow. This bird takes three years to reach its breeding plumage; its appearance changes with each fall molt.

Their breeding habitat is near lakes, rivers or the coast in Canada and the northern United States. They nest in colonies, often on islands; the nest is on the ground near water. This bird tends to be faithful to its nesting site, if not its mate, from year to year.

They are migratory and most move south to the Gulf of Mexico and the Atlantic and Pacific coasts of North America, also the Great Lakes.

This gull is a regular wanderer to western Europe, and in Ireland and Great Britain, it is no longer classed as a rarity, with several birds regularly wintering in these countries.

These birds forage in flight or pick up objects while swimming, walking or wading. They also steal food from other birds and frequently scavenge. They are omnivorous; their diet may include insects, fish, grain, eggs, earthworms, and rodents. These birds are opportunistic and have adapted well to taking food discarded or even left unattended by people.

In the late 19th century, this bird was hunted for its plumage. Its population has since rebounded and it is probably the most common gull in North America. In some areas, it is displacing less aggressive birds such as the Common Tern.

The text within the green border is licensed under the GNU Free Documentation License. To see the full article with more information, visit the Wikipedia article “Ring-billed Gull“. All content outside the green border is copyrighted by McBryde Website Design.

For more information from the USGS (United States Geological Survey)
on the Ring-billed Gulls, click here.