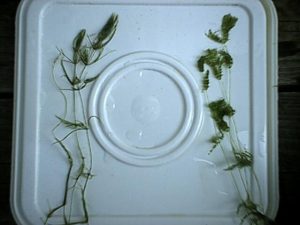 Stinkweed is of the macrophytic alga Chara spp. This large plant looking algal group has many species, several of which are found in our Piedmont lakes. When crushed in hand, several have a distinctive odor some folks describe as a garlic smell, thus the common name of “stink weed.”

This genus of algae loves shallow warm water with a soft sediment bottom which is the common habitat in coves. It is considered a “good plant,” giving protective cover to small fish and their invertebrate food. It is usually most noticeable from mid-summer until early Fall when it begins to die back returning the following season from small reproductive bodies that overwinter in the bottom mud.
There is no recommended control in reservoir environments other than hand raking. Within a day or two of being removed from the water and scattered on the shoreline, the plant will dry in the sun to almost nothing.

Back to Aquatic plants