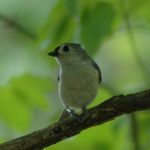 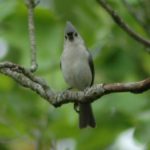 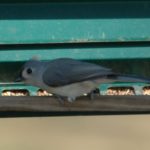 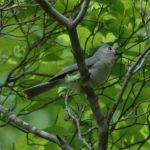 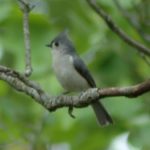 The Tufted Titmouse, Baeolophus bicolor, is a small songbird, a passerine bird in the tit family Paridae.

These birds have grey upperparts and white underparts with a white face, a grey crest, a dark forehead, and a short stout bill; they have rust-colored flanks. The Black-crested Titmouse, which is found in central and southern Texas and was considered to be a subspecies of this bird, is now considered a separate species.

Their breeding habitat is deciduous and mixed woods in southeastern Canada and the eastern United States. They nest in a hole in a tree, either a natural cavity or sometimes an old woodpecker nest. They line the nest with soft materials, sometimes plucking hair from a live animal such as a dog. Sometimes, a bird born the year before remains to help its parents raise the next year’s young. The pair may remain together and defend their territory year-round.

These birds are permanent residents and often join small mixed flocks in winter.

They forage actively on branches, sometimes on the ground, mainly eating insects, especially caterpillars, but also seeds, nuts, and berries. They will store food for later use.

This bird’s range is expanding northwards, possibly with the increased availability of food at bird feeders.

The text within the green border is licensed under the GNU Free Documentation License. To see the full article with more information, visit the Wikipedia article “Tufted Titmouse“. All content outside the green border is copyrighted by McBryde Website Design.

For more information from the USGS (United States Geological Survey)
on the Tufted titmouse click here.