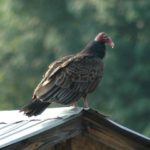 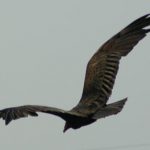 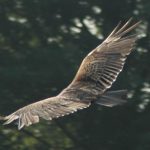 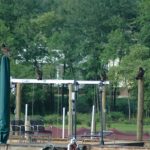 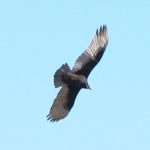 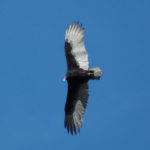 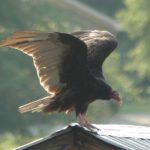 Turkey Vultures are common around Lake Norman and most people call them Buzzards.

The Turkey Vulture, Cathartes aura, is the most common North American Vulture. It is an extremely graceful bird in flight. It seldom needs to flap its long wings once airborne but soars high overhead looking for carcasses.

These large birds of prey are mostly brownish black, but the flight feathers are gray, creating a contrasting pattern. The head is small in proportion to the body and has no feathers on it; adults’ heads are red and immatures’ are black. The birds have a wingspan of about 2 meters. While soaring, they hold their wings in a V-shape and often tip “drunkenly” from side to side, sometimes causing the gray flight feathers to look silvery as they catch the light. The flight style, small-headed and narrow-winged silhouette, and underwing pattern make this bird easy to identify at great distances.

The Turkey Vulture is found in open and semi-open areas throughout the Americas from southern Canada to Cape Horn. It is a permanent resident in the southern United States but northern birds may migrate as far south as South America.

These birds soar over open areas, watching for dead animals or other scavengers at work. Unlike most other birds, they also rely on smell to help locate their food. They also eat some vegetation.

The nesting site is in a protected location: on a cliff, inside a hollow tree or in a thicket. There is little or no construction of a nest. Females lay two eggs, cream-colored with brown spots. Both parents incubate, and the young hatch at around 40 days. The adults regurgitate food for them and care for them for 10 to 11 weeks.

Often, small to large groups of these birds spend the night at communal roosts. Favored locations may be reused for many years.

This bird got its common name because the adult’s bald red head was thought to resemble that of a male Wild Turkey.

In the United States, this species receives special legal protections under the Migratory Bird Treaty Act of 1918.

The text within the green border is licensed under the GNU Free Documentation License. To see the full article with more information, visit the Wikipedia article “Turkey Vultures“. All content outside the green border is copyrighted by McBryde Website Design.

For more information from the USGS (United States Geological Survey)
on the Turkey Vultures, click here.